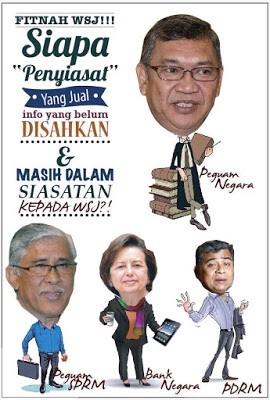 THE BANK NEGARA SCANDAL, YET AGAIN

There is no confirmation yet how the police are going to proceed with this case but indications are they are already quite fed up with the whole matter and this time may throw the book at Datuk Nurshamsiah Mohd Yunus, Shamsuddin Mahayidin and Abdul Rahman Abu Bakar.

THE CORRIDORS OF POWER

That was the Bank Negara announcement of Wednesday, 3rd February 1999.

The Murad story is a long story and if you want to know what that story is you can read about it HERE. The long and short of it is: a very senior man in Bank Negara was forced to resign (as were some others as well around that same time) because he was involved in laundering RM3 billion of Anwar Ibrahim’s money.

Murad was eventually arrested and in his statement he revealed how the RM3 billion was distributed all over the world and placed in various bank accounts.

Just six years before that it was revealed that Bank Negara lost RM30 billion in a Forex scandal that implicated both Tun Dr Mahathir Mohamad and Anwar. Lim Kit Siang, the opposition leader at that time, was so outraged, especially about Anwar lying to Parliament, that he demanded his resignation.

Datuk Nurshamsiah Mohd Yunus, Bank Negara’s Deputy Governor, plus Shamsuddin Mahayidin and Abdul Rahman Abu Bakar, have been identified as the three culprits from the bank who leaked confidential information to the Wall Street Journal.

A report has already been made against them and there is a strong possibility they are going to suffer the same fate that Murad did back in 1999.

The authorities are working on the angle that these three Bank Negara officers are trying to subvert the government and subversion can be interpreted as an act of treason. This can have very serious repercussions on the country and any act of sabotage to bring down the country is punishable under the charge of waging war against the Agong and can attract the death sentence.

There is no confirmation yet how the police are going to proceed with this case but indications are they are already quite fed up with the whole matter and this time may throw the book at Datuk Nurshamsiah Mohd Yunus, Shamsuddin Mahayidin and Abdul Rahman Abu Bakar.

We shall wait to see what the police say over these next few days.

How this ‘persuasion’ will be done was not mentioned but probably, as Don Vito said in ‘The Godfather’, they can “make him an offer he can’t refuse.”

I just love that movie, don’t you? I have probably seen it more than six times, the most recent being last month.
Posted by Tun Faisal Ismail bin Aziz at 3:04 PM